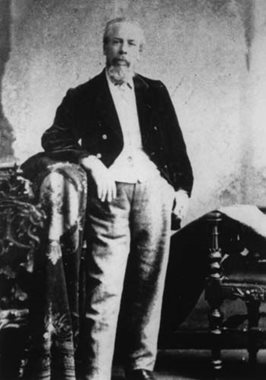 Larnach's first wife Eliza Guise, had six children - Donald, Douglas, Kate, Colleen, Alice and Gladys.  Eliza died at the age of 38 when Gladys was still a baby.  Larnach then married Eliza's half sister Mary Alleyne.  They were married for 5 years when sadly Mary also died at the age of 38.  Larnach then married a much younger lady, Constance de Bathe Brandon.
Larnach was struck by tragedy when his favourite daughter Kate died in her 20s. Five of the children were sent to England for their education. This meant long sea voyages and a lot of time away from the Castle and family.
After Larnach's suicide in 1898 the family was further torn apart by legal battles over Larnach's property as he died intestate as well as the "known" affair between his son Douglas (Dougie) and his wife Constance. The family sold the Castle in 1906.